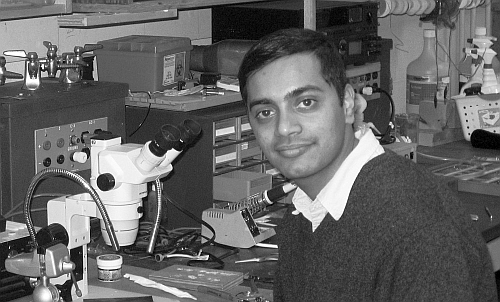 Nikhil received his M.S. in Physics from Indian Institute of Technology (IIT), Mumbai, and then moved to University of Massachusetts, Amherst for his Ph.D. training in Biophysics under the mentorship of Dr. Mark Tuominen, where he developed new measurements methods that revealed for the first time electron conductivity and storage capacity in microbial biofilms due to bacterial cytochrome proteins. His postdoctoral work with Derek Lovley in the Microbiology Department demonstrated that the conductivity is essential for bacterial respiration and communication.
In 2015, Nikhil established his independent group at Yale and has been leading an interdisciplinary team to develop and apply novel technologies to define the mechanisms by which microbes interact with and manipulate their environment, with the ultimate goal of engineering these interactions to control microbial pathophysiology and ecology. Nikhil has received the NIH Director’s New Innovator Award and Hartwell Foundation Individual Biomedical Research Award in 2017, Charles H. Hood Foundation Child Health Research Award in 2016 and the BWF Career Award at the Scientific Interface in 2014.